This is the final post of AEAM and Today I’m going to discuss the video stabilization methods that I implemented in my AEAM Design to eliminate various jitters and distortions. These methods are implemented from scratch by utilizing OpenCV only. So let’s begin!

“Artificial intelligence is growing up fast, as are robots whose facial expressions can elicit empathy and make your mirror neurons quiver.” —Diane Ackerman

Video stabilization refers to a family of methods used to reduce the blurring & distortion associated with the motion of the camera. In other words, it compensates for any angular movement, equivalent to yaw, pitch, roll, and x and y translations of the camera. A related problem common in videos shot from mobile phones. The camera sensors in these phones contain what is known as an electronic rolling shutter. When taking a picture with a rolling shutter camera, the image is not captured instantaneously. Instead, the camera captures the image one row of pixels at a time, with a small delay when going from one row to the next. Consequently, if the camera moves during capture, it will cause image distortions ranging from shear in the case of low-frequency motions (for instance an image captured from a drone) to wobbly distortions in the case of high-frequency perturbations (think of a person walking while recording video). These distortions are especially noticeable in videos where the camera shake is independent across frames. The ability to locate, identify, track and stabilize objects at different poses and backgrounds is important in many real-time video applications. Object detection, tracking, alignment, and stabilization have been a research area of great interest in computer vision and pattern recognition due to the challenging nature of some slightly different objects such as faces, where algorithms should be precise enough to identify, track and focus one individual from the rest.

Video Stabilization include mechanical, optical and digital stabilization methods to stabilize video. These are discussed briefly below:

A few days back, I experienced high-frequency jitteriness at the output of my AEAM’s Output. The vibrations due to motion in the cameras/Servos/platform that was causing tracked features to get lost on the way and thus resulting in false-positive movement of eyes. I considered using the Digital Video Stabilization technique(discussed above) for our purpose. Even though there is commercial software(like Sony Vegas Pro) available that could stabilize the image, but due to limited space, low memory, real-time, and open-source considerations, I utilized my favorite OpenCV Computer Vision library for this purpose.

So, In order to implement Video Stabilization in OpenCV, I studied & experimented various methods published in various research papers and selected two of them for benchmarking, Since they’re more OpenCV friendly and properly documented, the rest of them. Those methods are followed:

The first method is already been implemented in Matlab here and C++ here. But unfortunately, there was no source code available for the second method, neither I know any. So I re-implemented both these methods in python. Wonder why python?, well, python provides some of the best Extensive Support Libraries, and is suitable for any cross-integration with any other programming language. A summarized explanation of both method is discussed below with suitable examples:

This method tracks the salient feature array of frames and uses this as an anchor point to cancel out all perturbations relative to it. The original method works for the fixed length video only and not with real-time feed. So I modified this method to work with the real-time output of my AEAM. The modified algorithm works as follows: 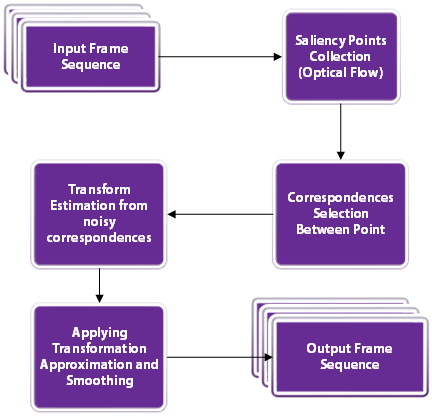 Hence from the resultant stabilized video is as above, depicting the successful implementation of this method in both recorded Video and Real-time application. The graphs shown at the end, in the video is as follows: 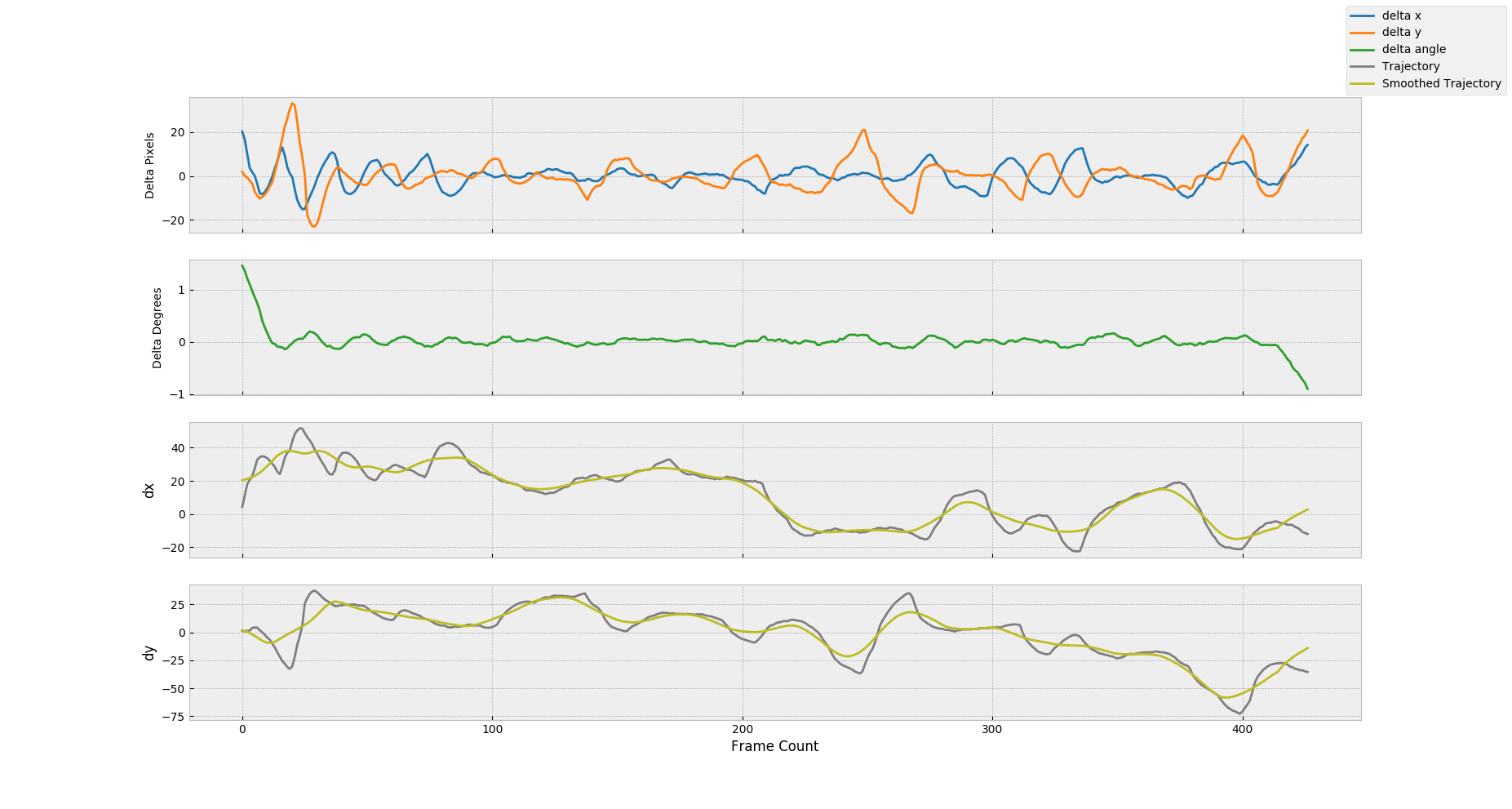 After observing this method’s performance with different videos and live feed, I reached the following conclusions:

This method purposes an efficient video denoising approach that produces stabilized videos by utilizing the recently proposed meshflow motion model for the camera motion compensation. The meshflow is a spatially-smooth sparse motion field with motion vectors located at the mesh vertexes. The model is very effective and efficient for the purpose of the multi-frames denoising due to its internal characteristics such as the lightweight, the nonparametric form, and the spatially-variant motion representation. Specifically, the meshflows are estimated between adjacent frames, which are used to align frames within a sliding time window. A denoised frame is generated by fusing of several registered frames in a spatial and temporal manner with outlier rejections. This method is implemented for multi-core CPU’s with high RAM availability and therefore not suitable for Low Memory Raspberry Pis, also implementation was quite a challenging as no sample source-code was available to work with.

Meshflow model The MeshFlow is a spatial smooth sparse motion field with motion vectors only at the mesh vertexes. The MeshFlow is produced by assigning each vertex a unique motion vector via two median filters. The path smoothing is conducted on the vertex profiles, which are motion vectors collected at the same vertex location in the MeshFlow over time. The profiles are smoothed adaptively by a novel smoothing technique, namely the Predicted Adaptive Path Smoothing (PAPS), which only uses motions from the past. It is calculated by the following methods:

Typically, there are two challenges with respect to practical video denoising, i.e., the camera motion compensation and the handling of outliers during the temporal pixels fusing. The former refers to the image registration between adjacent video frames. As the camera is not stationary during the capturing, accurate motion estimations can increase the performance of various applications, such as the HDR, the video deblurring and the video stabilization. The latter can suppress the artifacts (e.g., ghosting) introduced by misalignments, which may be caused by various reasons, including dynamic objects, occlusions and insufficient descriptions of the motion model (e.g., a single homography).

The denoising(stabilizing) process can be generalized as follows:

Hence as demonstrated in the video, a solution to correct the rolling shutter distortions and stabilize wobbly distortions in the case of High-Frequency perturbations is implemented successfully and the performance is comparable to YouTube’s State-of-the-art Algorithm.

Through a number of precisely calculated experiments, I concluded:

Through these experimental methods, I recreated two Video Stabilizer algorithms from scratch in OpenCV, that demonstrate a solution to correct the rolling shutter distortions in videos recorded by hand-held devices(as shown in the video) & robotics (such as in Quadcopter, UAVs) etc. Both have their pros and cons, therefore can be used to stabilize videos(AEAM output in my case) and thus finally we are able to create a robust AEAM Design.

Hey there, Hope you enjoy reading this article. If so, Share it with your family & friends! So Stay Tuned and Stay Creative ;)